Prior to his lecture, Fox met with nearly 100 Wayne State students during a special seminar at the Detroit Institute of Arts and later signed copies of his book, Revolution of Hope: The Life, Faith and Dreams of a Mexican President. 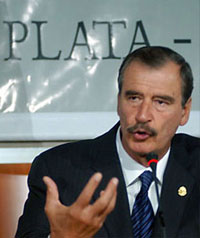 Fox, one of the most charismatic figures in modern Mexican history, was elected that nation’s 62nd president in July 2000. His presidency ended 71 years of uninterrupted rule by the Institutional Revolutionary Party.

Fox has a degree in business administration from the Ibero-American University in Mexico City. In 1964 he began working for Coca-Cola as a delivery driver and ended up as president of the company in Mexico. He entered politics in the 1980s and in 1995 was elected governor of the state of Guanajuato. As president he sought to reduce corruption in government, improve relations with the United States, overhaul Mexico’s law enforcement system and resolve the causes of civil unrest in poorer provinces.

Fox has called for a North American Union, a single North American currency and radical changes to U.S. immigration policy to allow more Mexicans to enter this country legally. In this appearance in the FOCIS series, he offered an informed and candid perspective on the state of the world, focusing on relationships between the United States and Latin American nations, the role of the U.N. in world affairs and the promise and problems associated with increasing globalization.