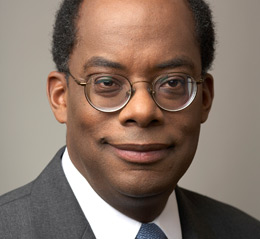 Roger W. Ferguson, Jr. is President and Chief Executive Officer of TIAA-CREF, the leading provider of retirement services in the academic, research, medical and cultural fields and a Fortune 100 financial services organization with $374 billion in combined assets under management (as of 6/30/09).

Prior to joining TIAA-CREF in April 2008, Mr. Ferguson was head of financial services for Swiss Re, Chairman of Swiss Re America Holding Corporation and a member of their executive committee. From 1984 to 1997, he was an Associate and Partner at McKinsey & Company. He began his career as an attorney at the New York City office of Davis Polk & Wardwell.

Mr. Ferguson is a member of President Obama’s Economic Recovery Advisory Board and served on the Transition Economic Advisory Board. He is also a member of the Boards of Trustees for the Institute for Advanced Study, Carnegie Endowment for International Peace, the New America Foundation, and Memorial Sloan-Kettering Cancer Center. He is on the Board of Directors of Brevan Howard Asset Management LLP and the Partnership for New York City, and a member of the Council on Foreign Relations, the Economic Club of New York, the Harvard Law School Visiting Committee, and the Group of Thirty.